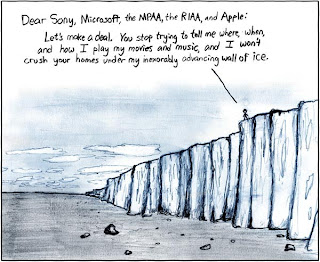 From "the rumour mill":
"This week the world has been a-flutter with the news that Radiohead might be releasing new material on Monday, August 17 after a new song seemed to appear online.

Now, eagle-eyed observers have noticed that elements of the file and code attached to the song featured the words “wall” and “of” and “ice”, and that indeed the combination of the three appeared in a mysterious poem that accomanpanied the track on back-of-the-internet-lorry site what.cd.
If you therefore assume that Radiohead follow the same model as they did with In Rainbows – ie they create a website based on the title of the release – you get http://www.wallofice.com/. And that leads straight to the WASTE shop. In other words, it looks very much like the rumours are true: there’s an EP coming with that title and Radiohead’s site is all set up to receive the orders via that site.
It would also be a massive raspberry to EMI, who are reissuing a load more Radiohead back catalogue to feed Guy Hands’ coffers in a few weeks, not to mention being entirely in tune with Thom Yorke’s hints that the band are no longer interested in going down the path of releasing full-length albums."
This new song is intoxicating, I listened to it a bout 4 times in a row this morning...
Posted by Brent at 9:32 AM