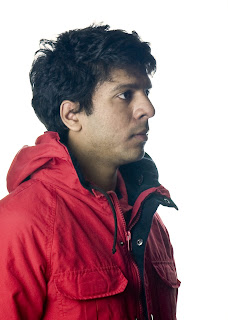 Junk Culture is a new project by Deepak Mantena, a recent signing to Illegal Art, home of Girl Talk, Steinski, Bran Flakes and more. Junk Culture's debut EP, “West Coast,” features sound tapestries created from mixing fractured vocals with pop hooks and samples, all run through a handheld recorder, which gives his constructions a gritty, lo-fi, loop-based sound, and an overall euphoric warmth. Leading up to this release, Deepak would capture field recordings, samples of songs he really liked, and samples of himself playing instruments on a cheap pocket recorder, all of which sounded fresh to his ears. "West Coast" embodies these "fresh" sounds, and employs them for what Deepak describes as "a love letter to outer space -- it gets desperate and schizophrenic as the record plays out, but is a sort of celebration of spirit as a whole." It is essentially Deepak's manifesto of energetic raw sound that transcends rigid genres, and is textural, emotive and compelling.

Emulating more of a live band than an electronic act, the visceral Junk Culture live show also involves Deepak's younger brother, Nitin, on drums. The performance includes the Mantena siblings jamming to a tight string of sequences that involve sampled patterns, live percussion, synced visuals of films from the 50's/60's, and Deepak's singing. Live, the “West Coast” tracks have him singing on top of sampled voices, while material already being developed for the subsequent EP involves a more traditional vocal approach, further bridging the gap between sample-based production and songwriting.

Born in Idaho in the mid-80's shortly after his family immigrated from India, Deepak grew up in several locations ranging from Texas to Michigan, and ultimately he enrolled at the University of Mississippi. He recently relocated to Portland, Oregon to pursue graduate studies, and while his sound collecting process is removed from the computer, his research focuses on interface design. Besides composing and performing music, Deepak has been involved in producing short films (and curating a film showcase), photography, writing (at one point for the blog, Brooklyn Vegan), developing apps for the iPhone, and even acting on stage and film.

The first Junk Culture EP, “West Coast,” will be released October 27, 2009, with another EP following in the spring of 2010. Junk Culture will play select west coast shows with Girl Talk this fall.

Listen to/download the title track off of the "West Coast" EP HERE.