"Sparse beats dispersed over automaton thought provoking intelligence. This is the smartest electronic album I own.." 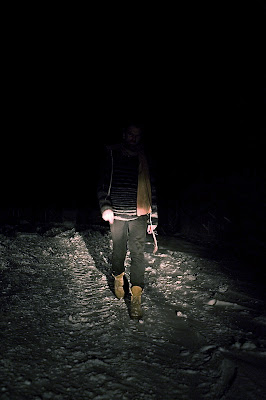 Ben Frost
Perspicacious Mechanization
Ben Frost Bio:
Born 1980 Melbourne Australia
Lives Reykjavík Iceland
The music Ben Frost is about contrast; influenced as much by Classical Minimalism as by Punk Rock and Metal, Frost's throbbing guitar-based textures emerge from nothing and slowly coalesce into huge, forbidding forms that often eschew conventional structures in favor of the inevitable unfoldings of vast mechanical systems.
“…The emotional power of Frost's music comes precisely from the stark contrast between extremely basic musical material and the deadly virtual instruments he invents to perform it… This is Arvo Pärt as arranged by Trent Reznor” –Wire Magazine, 2007
On albums like Steel Wound, released on the Room40 label in 2003 (Pitchfork: “An exemplary ambient experience”) and Theory of Machines on Bedroom Community in 2007 (Boomkat: “The Future of electronic music…”) Frost’s music is more than a cerebral exercise and has an undeniable visceral presence, felt as much as heard. His compositions are created with an acute awareness of the listener and their comfort thresholds, exploiting every extreme of pitch and volume. His notorious, building-shaking performances at international festivals including Montreal’s famed MUTEK combine amplified electronics with the furious thrashing of live guitars. Frost himself has been described as “one of the most interesting and groundbreaking producers in the world today.” (Boomkat). His music’s intense physicality has filled gallery spaces and driven contemporary dance productions by Chunky Move, the Icelandic Dance Company, and coreographer Erna Ómarsdottír.
The massive scale of Frost’s music often projects a sense of remoteness and isolation and yet he remains in demand as an artistic collaborator, having performed and worked with/for artists as diverse and acclaimed as Björk, Stars Like Fleas, Tim Hecker, Amiina, Christian Fennesz, Jóhann Jóhannsson, and Bora Yoon, and with celebrated Bedroom Community labelmates Sam Amidon (Appalachian folksinger), Nico Muhly (classical composer), and longtime collaborator Valgeir Sigurðsson (electronic composer/producer) with whom Frost shares Sigurðsson’s recording facility Greenhouse Studios in Reykjavík.
Underlying Frost’s often noisy, defiant aesthetic is a quiet and welcoming humanity, and a subtle sense of emotional drama which has recently bought him to the attention of the film world, where in 2008, utilizing the Icelandic string quartet Amiina, Frost composed the tender but ominous score for the forthcoming True-Crime feature film In Her Skin, starring Sam Neill and Guy Pearce; a cinematic sensibility also pervades his much anticipated forthcoming Lp By The Throat, whose darkly surreal sound-world owes as much to David Lynch as it does to David Lang.

Hello, how are you?
Fine thankyou, im enjoying being home for a while. I am actually in the West Fjörds at the moment as this is the first summer I have had in iceland in 2 years, I had almost forgotten how great it is to just be at home for a while.
What are you currently listening to?
Right at this exact moment itunes is playing Mobb Deep - "The Infamous"; an incredible record. For me that record was kind of the point where hip hop production became more about atmosphere than beats and really paved the way for artists like Portishead, Massive Attack, etc, and then in many ways alot of my music too- Havoc's production on infamous is just so brutally fucking minimalist and hardcore. Other than that though, lets see- Pärt's Silouans Song I must have played 150 times in the last month, James Blackshaw, Hildur Guðnadóttir, Neurosis, Kate Bush's "Hounds of Love"... and a friend of mine just sent me a record of Armenian Liturgical music which I am really enjoying too. On my to do list is the new Sunn O))) and a 7" ep from my friend Kristin.
What have you been up to since the release of “Theory Of Machines”?
There has been a lot of work between then and now. The new record has been a really hard project to put to bed- I think we have spent more time on the mastering than on the mixing, which is something. It has been a hard record to get perfect. My personality demands constant change and there is now a healthy level of schitzophrenia in my work- scores for film and dance, production work where I can (I do miss the simple joys and challenges of mixing someone else's record, where its not so emotionally debilitating). And because of Theory of Machines I am performing live a lot now too- which I am finally starting to enjoy.
The problem up until recently has been that I could never fill the venues that had the power in their sound systems to handle my music, but that has changed. It really needs to be a dangerously large sound for me to feel something when I play live, otherwise its just sport-fucking. If I am completely in control of it there is no challenge then there is nothing to fear from the experience and well I mean, its my music and I know it inside out, so the only thrill in there for me personally is if it can scare me a little.
I really like the new song “Black”, is there a title and/or official release date for the next album?
The new album is called BY THE THROAT. It will be released in October, on the 19th I believe. The song you are referring to is on the new record- its title is "Leo needs a new pair of shoes" which is a line I stole from David Lynch.
When you write music do you improv or do you have a pre-planned structure laid out?
Its usually somewhere between the two. What I mean is, that I have very specific pre-conceived ideas about a piece of music or moreover the record as a whole which usually stem from a series of ideas and images of how it should sound, the combination of elements, rhythmical structures colours, etc, but then from that point it is improvisation within a very tight framework.

Will there ever be a full US tour?
2010. I dont have an agent in the US, so it is very up in the air at the moment, but I can promise that its absolutely my intention to tour the states in 2010. Tim Hecker and I have been concocting some kind of co-tour which would be exciting. That new album of his is stellar work.
What’s next for the label Bedroom Community?
There are so many plans in Bedroom Community it gets quite overwhelming at times. There is a new Sam Amidon Lp in production now which is sounding incredible- we should have it done in the the fall I think. There is also a record from the Icelandic composer Daniel Bjarnason, and there may be another addition to the roster for a spring release- we have the privelige of being very choosy and we are using it.
Whatever happened to School Of Emotional Engineering?
School of Emotional Engineering eventually became bigger than me and became about a band, the members of whom are now spread across the globe, so being able to make music together means being in the same place for a length of time that would allow it, and in 4 years that opportunity has still yet to arise. Having said all of that, there are literally hours of unfinished material for a new album that resurfaced just recently. It was all on a single hard drive which crashed, and I thought it was lost forever, but then my assistant engineer "accidently" rebooted the drive and recovered it... I put some of the work on a disc and drove around with it last month and enjoyed it a great deal... I have not closed any doors on it.
You can only keep/listen to ONE album for the rest of your life ..which album would it be?
It would be a toss up between "Disintegration" by the Cure and Arvo Pärt's "Tabula Rasa"
Are you living your dream?
In my dreams everything looks like a Rothko painting and sounds like Joy Division
Thanx Ben!
Ben Frost is currently putting the finshing touches on his upcoming full length "By The Throat", look for that in October.!!
Posted by Brent at 4:14 PM