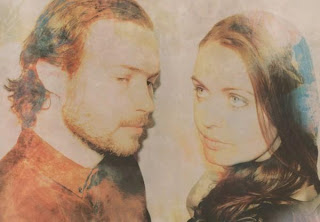 Syntaks
Ghostly Intl..
From Ghostly:
Over a century ago, Norwegian author Knut Hamsun proposed a new creative ideal, a form of literature that would take the intricacies of the human mind as its main object, effectively describing “the whisper of the blood and the pleading of the bone marrow.” One hundred-plus years later, Danish duo (and avid Hamsun devotees) Syntaks have taken up Hamsun’s agenda with single-minded purpose, naming their new album after a character in Hamsun novel Hunger, recording it just blocks from where Hamsun wrote his masterpiece, and taking the author’s ambitious mission statement as their own. The album in question, Syntaks’ luminous Ylajali, crackles with emotion and imagination, giving form to its creators’ vibrant inner lives.
In Ylajali’s beautifully scorched sonic landscape, acres of drones run beneath Anna Cecilia’s wordless sighs; beats crunch like autumn leaves while synthesizers swell, flourish, and disappear. Songs either tramp through hazy forests until they fade into the dark (the Boards of Canada-esque “Love Camp 23”), or stack tone upon tone like translucent building blocks, building to forceful, near-operatic crescendos (the epic “She Moves in Colors”). Syntaks’ Jakob Skott is a drummer by trade, and his percussion—both live and programmed, but always lent an otherworldly sheen—plays the sinister counterpoint to Cecelia’s tender melodies. “The Shape of Things to Come” typifies Syntaks’ dreamlike musical logic, drifting through fields of placid melody until sheets of guitar noise, metallic snares, and choir-like vocals rush in. Once the storm passes, all that’s left is the sun, glinting through the mist.
Hamsun would be proud: Syntaks’ Ylajali is an ambient pop album as dense, emotionally complex, and, ultimately, as mysterious as the human mind; and like any great mystery, Ylajali keeps its audience engrossed until the bittersweet conclusion.
ABSOLUTELY GORGEOUS, sounds like early 4AD material mixed with modern electronic atmospheres & beats... Their debut Ghostly release comes out November 3rd, 2009..
Posted by Brent at 10:25 AM