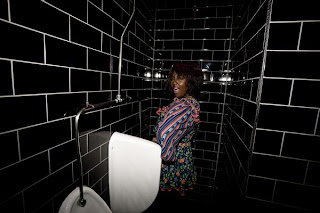 The best thing from across the pond since Madonna (wait, she's not from the UK?) is thecocknbullkid, aka Anita Blay, and her debut US release, the "Querelle" EP, is storming our shores today, August 4th, 2009. To commemorate this occasion, Ms. Blay has compiled a mixtape for public consumption, and Chocolate Industries recording artist Esser has remixed her club-ready track "Kiss Kiss Kill". Here's what Anita had to say about her mix: “I didn't want to make a dancey sort of mixtape because everyone does that. I like mixtapes that hold subliminal messages. I'd like to think my selections were saying 'I really want to sleep with you but I don't know how to say it.'"

Born in Hackney, East London, to Ghanian parents, thecocknbullkid is not the most conventional of pop stars. Fortunately, this does little to slow how rapidly she's establishing herself as one of 2009’s brightest pop hopes. She has spent the past three years exploring all manner of influences, forging a wholly distinctive sound. Her style resides firmly on the dark side of pop. There’s an almost Trojan quality to it -- Anita’s ever-expanding repertoire is a subversive, sometimes sinister, and always-sublime mix of sex, death, ugliness, wit and depravity, found amidst the everyday, and pegged onto supremely inventive pop melodies.

She is currently in the process of writing her debut full-length with virtuoso pianist/producer/songwriter Gonzales (who has worked with the likes of Feist, Peaches, and Jamie Lidell). The world can eagerly anticipate her full-length in early 2010, officially shaping up to be the year of the cock n bull!

“Few women can rock a half-shaven head without looking like a Mad Max extra, but 23-year old Anita Blay, who performas as cocknbullkid is a fierce figure. Born in Hackney, East London, to Ghanian parents, Blay’s music is nible, full-throttle pop that marries shimmering vocals to biting lyrics and irrespressible synth lines.” -- Nylon for Guys

“Within seconds of taking to the stage she owns it, her band raising merry funk-based hell behind her as she coos and purrs her way through a short set. That she’s a megastar in waiting isn’t in question: how long it takes the rest of the planet to catch up is.” – NME
Reminds me of a Kylie Minogue a little, fun & clubby..
Posted by Brent at 2:42 PM