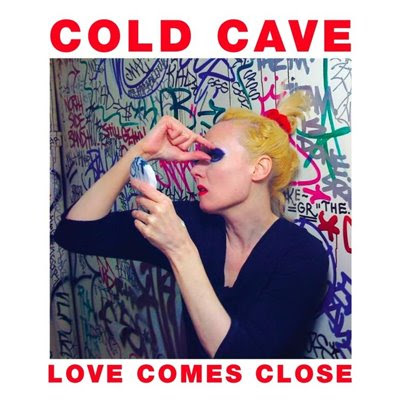 8.75 out of 10
Find it here.
Whether you're ready for them or not Cold Cave are here. They've released over 3 albums worth of material on various hard to find 7" records as well as a cd that collected most of those tracks on one album, they've been a huge part of the "new" movement in New York's underground music scene for a few years and now their official "debut" release, which is on both Vinyl & CD is finally out. The question is, how good are they? Do they live up to all of the "hype" the press has created for them from various indie outlets online?
Ok (talking to myself), breathe in..
I've only been following Cold Cave for about a year now, which is about half of Cold Cave's time together, but through that short amount of time I have become thoroughly obsessive with finding all of their releases. It's taken me a bit of time, but I have all of them now, and not one song disappoints. Their first two official releases "The Trees Grew Emotions And Died" and "Painted Nails" blew me away with their incredibly "lo-fi-rrific" Industrial beats. And every other song since then has shown me how this band progresses it's sound almost every other day. So yes, Cold Cave DO live up to the hype AND they exceed it.
With "Love Comes Close" I wasn't sure what to expect, I figured I would be pretty happy with it and maybe just go on with my day. However since I've owned this album (which has only been for a couple days) I have listened to it almost 7 times now. So what is it that makes it good? Remember Crystal Castles (I'd hardly doubt you would forget them)? Cold Cave deliver that same form of catchy "Post-Electro-Pop" mixed with their original Industrial heritage and even "Eep!" -- solid production. That's right, instead of following the "Lo-Fi" path of many others Cold Cave have decided to push the production up a thousand (maybe a million) notches, producing songs that wouldn't hurt even the most sensitive of ears (maybe a few). The self-loathing/80's Goth inspired vocals are crystal clear, the synthesizers are in top-notch from busting out some of the catchiest rhythms you will hear the entire year, and the entire album can transcend you to time when mixing art with dance, pop, "the bizarre", and underground culture was once an unheard of trend. I'm ready for this EBM shit to end, I'm ready for the new Industrial revolution to begin. Friends! uhh Romans? Lend my your ears! Let us hold hands, raise a fist, wear a black t-shirt or something/whatever and march through the streets of deprived music worshippers and awaken there senses with the sounds of Cold Cave. Join me now! Please?
Ok, breathe out....
Yeaah.., I get particularly obsessed with at least one new band every year, this is the year of Cold Cave and "Love Comes Close" is EASILY one of my favorite albums of 09 and definitely one of my favorite Industrial-Art records ever. Sooooooo addictive. HIGHLY RECOMMENDED!
Standout Tracks: I wish I could be more specific with this answer, but I really do love all of the tracks on this album, check out "Youth And Lust"
Posted by Brent at 2:42 PM