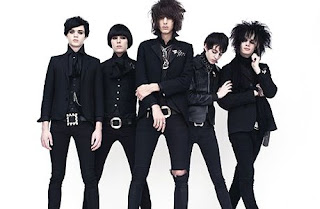 From The Horrors:
The Horrors are set to hit the studio with a "massive" act later in the year.
Their multi-instrumentalist Tomethy Furse told BBC 6music that the band intend to hole themselves up in the studio following six more months of live work to nail the collaboration – although he wouldn't reveal who the act was.
"We can't talk about them," he said. "Rest assured, they are massive. But we're playing for the next six months and then as soon as that's done we'll get in there.
"If we had the choice we'd probably do one month off and one month on, recording and playing, but you just can't do that. It doesn’t make any sense to anyone else but you."
The Horrors released their acclaimed second album, "Primary Colours", in May.
Ok, I'm curious..
Posted by Brent at 4:47 PM