Self-loathing/80's Goth inspired vocals, synthesizers in top-notch from busting out some of the catchiest rhythms you will ever hear, and other sounds that can easily transcend you to time when mixing art with dance, pop, "the bizarre", and underground culture was once an unheard of trend.. 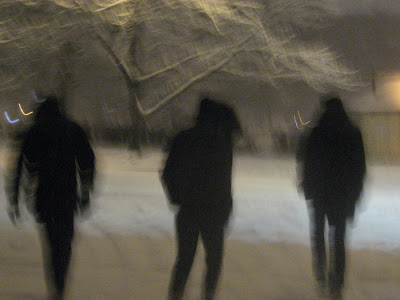 Cold Cave
Bleak Automated Adorationists
Cold Cave Bio:
Cold Cave is the brainchild of Philadelphia's Wesley Eisold, ex-Some Girls, Give Up The Ghost, XO Skeletons, and currently Ye Olde Maids, etc. Eisold received some high-profile press when Fall Out Boy reportedly plagiarized lyrics from his influential hardcore outfit Give Up The Ghost. He won an out-of-court settlement, is now credited in the liner notes of "From Under The Cork Tree" and "Infinity On High". Eisold's hardcore/punk background rears its head in interesting ways in Ye Olde Maids, but more especially in Cold Cave, a darkwave synth confection with more than enough static and noise cycling through to justify mentions of Prurient and Burning Star Core on his personal MySpace. The songs are danceable, dark, instantly infectious. Think '80s industrial and synth pop over-driven
through power electronics.

Hello, how are you?
I'm well, thank you.

What are you currently listening to?
Louderbach - Shine single. My favorite new song in too long.

Growing up did you listen to a lot of Industrial music?
Not so much when I was younger, just the bigger bands that were easy to find. I was more drawn to The Cure, Bauhaus, Sisters of Mercy, things like this. Then I was infatuated with punk and hardcore.
Lo-Fi music has been around forever, however within the past few years it seems the scene has blown up, whom/what do you think is responsible?
Technology of course. Accessibility- Everyone can record themselves now and accomplish a sound similar to favorite lo-fi records of the past. Thats easy, but not something to be concerned with.
Why do you put your music out in such limited quantities?
I don't think we do really. There are 1,000 copies of each single and distros and stores still have them yet people go straight to ebay without looking for them elsewhere I suppose. Who knows. Cremations and Love Comes Close are/will be available for anyone. The limited items were tour releases and contain music that will appear elsewhere. The Coma Potion 12" was in an edition of 100 because I couldn't imagine more than 100 people wanting to hear it.

You guys are on opposite coastlines, how did the Cold Cave/Crocodiles/Blessure Grave split come about?
The Crocodiles are old friends and we have been been in bands together in the past.

Out of the many Cold Cave songs that have surfaced, which are you most proud of and why?
I think at some point I have been proud of each one. I don't expect moments in time to stand the test of time, especially when I'm playing a dilettante God with music, particularly in the beginning, tracking the mistakes, calling them records.

Now that “Love Comes Close” has been released can we expect a large US tour?
We play the West Coast in september I believe but no plans for a full tour. I think we will at some point, as you said perhaps after the LP is released.

You can only keep/listen to ONE album for the rest of your life ..which album would it be?
The Wisdom of Joseph Campbell.

Are you living your dream?
No but my body is a monument to the idea of one.
Thanx Wes!
Cold Cave just released their debut full length "Love Comes Close", BUY IT NOW.!.
Posted by Brent at 3:47 PM