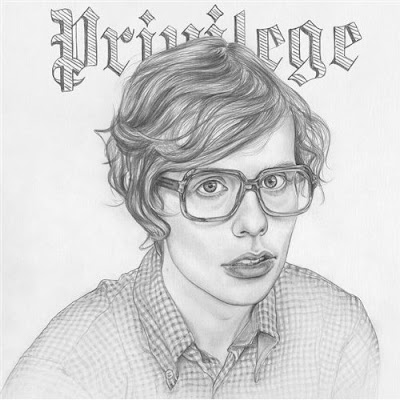 6.5 out of 10
Find it here.
I first became aware of Parenthetical Girls with their wonderfully glorious 2008 release "Entanglements". I listened to the album quite a bit when I first got it (almost addictively for a couple weeks). The music Parenthetical Girls creates is a pleasing mix of Indie/Jangle Pop fused with Classical arrangements, Folkloric tales, and unique/acquired vocals. Any-who, for those of you that are unaware; Parenthetical Girls are a group of Ex-Bedroom Pop stars turned Abstract Indie Pop stars who have been noticed by many reviewers and pop stars a-like as being one of "the next big acts". Mix the experimental pop side/early recordings of Brian Eno with the orchestral arrangements of Phil Spector, add a dash of Xiu Xiu's or maybe even Patrick Wolf's "playful side" and there you have it. "Privilege, Pt. 1" is somewhat of a concept album, the idea is to release a slew of EP's rather than one full length and have them all tie in with each other. So far, so good..

Zac Pennington's vibrato has the ability to swoon you under the right circumstances. His voice is truly unique, as well passionate and over zealous. You can hear/feel every emotion with every dip, swell, and quiver of his voice. The music behind the curtain is also quite unique. It could probably be best classified as "Left Field Indie Pop". Quirky electronics (minimal to the rest of the sound) fill in the voids between string arrangements and horn sections that sound seriously just like something you would hear from an old time Spector production mixed with a few other Indie Pop niches. A pleasing experience the first time around with a few more surprises each listen, Parentheical Girls should impress even the hardest to impress critics with ease.

Parenthetical Girls may not be for all, but for those of you that take your Indie Pop with a side order of ambitious and anomalous this could be your calling. If you're just now checking out this band I strongly recommend starting with "Entanglements" and then going on to this release, I do like this, but it's not quite as ardent as the "Entanglements", still though it's pretty great.