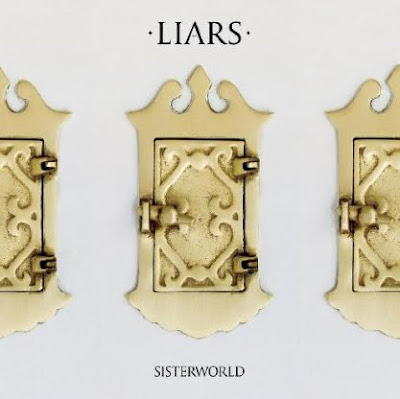 8 out of 10
Find it here.
I wish I could say that I've been following Liars sense day 1 of their existence, but it wasn't until 2006's "Drum's Not Dead" that I truly sat down and listened to them. Ever since then I have become a huge fan, I've made it a point to own every single, EP & LP they've recorded. My favorite album of theirs is either "Drum's Not Dead" for it's amazing production or "They Threw Us In A Trench.." for the amazing track "This Dust Makes That Mud (30 minute track!)". My third favorite album of theirs, and close to being my new favorite, is "Sisterworld". Liar's fans be ready for your face to be shredded off with their latest offering of Noise-Punk Terrorism..

If you haven't heard Liars by now imagine a modern mix of the early 80's No Wave scene with a Psych-Punk Rock edge and a few other minimal Industrial Drone sound fx. The music they write can sometimes be hard to swallow if you're not in the mood for in your face "Punk-Rock". Although labeling them as just "Punk-Rock" may be a little too vague, "Art-Rock" sounds better to me (that's a genre right?). Blazing guitars, bouncing bass lines, thumping, splashing & crashing drums, nonchalant/apprehensive vocals, a few keyboard sounds, and stringed instruments give this album the edge that most Liars albums have over all other Rock bands out there. To me the previous/self-titled Liars album was more focused on "commercial" appeal and seemed to stray away from the "weird sound" that make the Liars so terrific. There were a few tracks that I loved on it, but it is probably my least favorite of theirs. With "Sisterworld" it seems as if the have found that middle ground between "commercialism" and "noise/art". If you agree with me about their last being a little lack-luster, don't be afraid, "Sisterworld" will bring you back to an "obsessive Liars listening state-of-mind". Nearly every track on this album has enough punch, fervor, ferocity, and obscurity to keep most listener's happy.

This is the Liars album many fans have been waiting for.. Expect to see this album on many year-end lists. HIGHLY RECOMMENDED (especially if you love the Liars;)

Standout Tracks: All, I won't be picky here. Scarecrows On A Killer Slant has a nice "raw" edge to it, Too Much Too Much is a nice Psychedelic ender to the album..
Posted by Brent at 2:48 PM