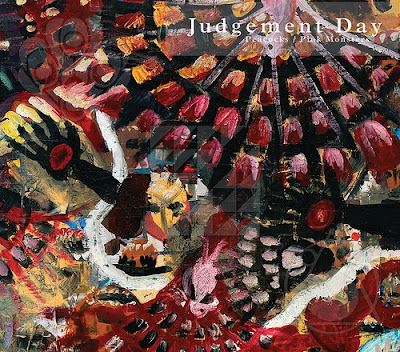 8.5 out of 10
Find it here.
I was raised around some pretty damn good metal music, so in that aspect I was spoiled from day one. The bar for truly amazing metal to fit my meticulous criteria was raised extremely high very early on, so very few bands wet my whistle through the years. Don't get me wrong though, I'm not completely let down by the genre. There are tons of mediocre metal bands that I'll always be able to find little gems in. But then there are a small handful of metal bands that (in my ears) are damn near flawless, the most recent being, San Francisco-based trio, Judgement Day. You won't find any electric guitars or basses here. Created by brothers Anton and Lewis Patzner, they don only a violin and a cello. Rounded off with the precision madman drumming of Jon Bush, they create an unconventional yet full-force take on Stringed Metal.
Upon my first listening of Judgement Day's 2nd release "Peacocks/Pink Monsters", my initial thought was that this album must have been recorded after an isolated bender consisting of nothing but Meshuggah, Tool, Explosions In The Sky, 16 Horsepower and maybe even a little Clint Mansell. The first track, "Cobra Strike" is an instant epic metal eye opener. The Slayer-like thrash tempo and melodic interludes set an accurate tone for the rest of the album. It's immediately followed by the hard hitting, odd time signature'd "Zombie Rodeo Clown". On the more post-rocky tracks like "Prelude", "Death March", and "The Constant", the musical maturity really shines through. It's these tracks that really satisfy the neo-classical/post-rock lover in me and can easily be compared to some of my all time favorite film scores.

One thing that ruins alot of metal bands for me; the vocals. Judgement Day have that covered by having no vocals at all. A formula I only wish will catch on with more metal bands. These guys are hardly new-bee's, Lewis was accepted into the prestigious Peabody Institute, a conservatory where he studied performance technique, perfection and advanced music theory. Anton was recruited to join Omaha's own indie-folk troupe Bright Eyes where he learned about improvisation and collaboration.
A handful of genre's are strongly represented within these twelve tracks. Whether your a post-rock lover who yearns for something a little heavier, or an old-school metal head who completely gets off at the sound of no-holds-barred, hyper drive 'jubby' math metal with strings (like me), you will NOT be let down. "Peacocks/Pink Monsters" will be releasing independently on April 13, 2010, I strongly suggest you mark this day on you calender.
Standout Tracks: ALL OF THEM. But especially Cobra Strike, Peacocks/Pink Monsters, The Constant
Posted by Brent at 7:17 PM