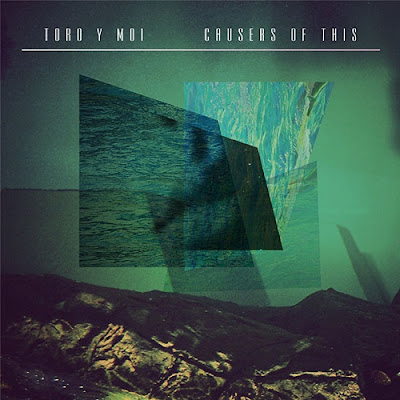 8.25 out of 10
Find it here.
There were a lot of talks about "new" genres like "Chill Wave" & "Glo-Fi" popping up last year. Some people latched onto the terms and made sense of what may come off as a pretentious definition of sound, and some just made Indie Electronic music. Toro Y Moi is one of those projects that indeed does live up to terminology "Chill Wave/Glo-Fi". To describe the terms; "Chill Wave" = Chill atmosphere's + New Wave aesthetics, "Glo-Fi" (about the same thing) = Glowing/Electronic Atmosphere's + Lo-Fi aesthetics. I'm not sure if I believe in creating new genre's every time a new band comes around considering most bands draw their sounds from vintage or even current bands. So if they're writing music that already existed why slap a new title on their sound? It's all just music right?
Chaz Bundick (Toro Y Moi) has been at it now for over 8 years with his version of Lo-Fi/Early FM Radio Electronic music. On "Causers Of This" you will hear plenty of (tons actually) "sleazy" synthesizer sounds (think Giorgio Moroder or Daft Punk), modern & vintage electronic drum-kit beats/pulsations, and R & B vocal styling's that bring to mind early Michael Jackson or maybe even Prince. This album would fit quite nicely in the Early 80's Synth Pop category, or maybe even somewhere around the era of the Disco crash. If you checked out Neon Indian or Washed Out last year, chances are you came across this guys name and may or may not have checked him out. If you like either of those projects I would recommend doing so now. If you like laid-back dancey music with noises that swirl back in forth from front, back, left, and right you will love this. This will most definitely be one of the best Indie Electronic (or whatever you want to classify it as) releases of the year. Expect to hear more about Toro Y Moi as time progresses. Also, if you can track it down check out one of Chaz's earlier releases titled "My Touch", it's just as addicting and a little less produced, not that this release really is that "over produced" (it's just right actually).
Whether you want to consider this a new genre of music or not you should at least admit it kicking ass. I'm in-love, and I can't wait to hear where Toro Y Moi takes his music in the future. HIGHLY RECOMMENDED.
Standout Tracks: All, I really can't pick a favorite. Although, I really enjoy; Blessa, Minors, Imprint After, Talamak
Posted by Brent at 3:05 PM