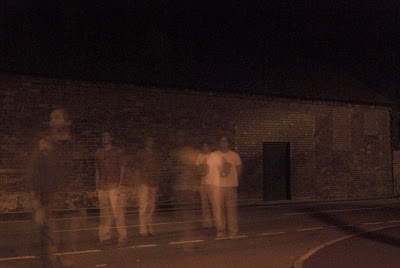 Epic45
Somnific Milieu Masons
Epic45 Bio:
Epic45 are based around the nucleus of Rob Glover and Ben Holton, who grew up on the same street in a small village in rural Staffordshire, UK. Rob and Ben have been writing and performing music together since they were at school, and released their first single as Epic45 in 1998.
Subsequent 7” releases won airplay and praise from BBC Radio 1 DJs John Peel and Steve Lamacq, and albums followed on Canadian indie Where Are My Records. Joining Make Mine Music in 2004, they released the highly acclaimed EPs “England Fallen Over” and “Drakelow”, drawing comparisons with Disco Inferno, Hood and Boards of Canada.
2007 saw the band’s album “May Your Heart Be the Map” chosen as one of The Word magazine’s Top Ten Albums of the Year.

Hello, how are you?
Currently suffering a little cold, but basically, I'm fine thanks.

What are you currently listening to?
Oh, loads as usual. Been really enjoying the last Tim Hecker album 'An Imaginary Country' and the latest Bibio and Clark albums on Warp are rather grand. Lots of older stuff too, Windsor for the Derby, I find, are especially lovely around this time of year, New Order 'Movement', Disco inferno 'Summers Last Sound' and lots of Radiophonic Workshop amongst others....

I read once that Epic45 started as a “tribute project” for a lost friend, is this true? Care to talk about him/her?
His name was John Wolverson, and he sailed off on a voyage off the coast of Norfolk in the Autumn of 1945 and was never seen again. He was a good friend of the family and used to live in a smaller village to the north of us called Church Eaton. Obviously I never knew him but the story haunted us as children and eventually fed into and directly inspired what was to become 'epic45'.

You guys just released a sweet little EP titled “In All The Empty Houses”, did you find the recording process for the album to be easy or hard?
The only hard part was finishing it. The actual recording of each track was a joyful, cathartic experience but we got lost inside ourselves when it came to the mixing stage. Eventually we reverted back to mixes that were nearly a year old. It's definitely something we plan to resolve with the next album....

Some of your music can be hard to obtain here in the US, now that you’re on Make Mine Music will your music be a little easier to find? Do you plan on re-releasing any of your older albums through MMM?
There are vague plans of re-releasing the first three albums on MMM, but there's some bits and bobs that need to be discussed before this can happen. As for being easier to obtain our stuff I'm not quite sure, we will be on i-tunes soon apparently....

Speaking of finding your music in America, will there ever be a large scale North American tour?
That is something we would all love to do, it's just a matter of sitting down and figuring out the logistics for such a task. So, hopefully yeah...

Out of all the songs you have written, which one is your favorite? Mine has to be “Against The Pull Of Autumn”, easily one of the best piano tracks I have ever heard..
Thank you very much, glad you think so. It's a funny one really, trying to pick a favourite, they're all special to me in their own little way. 'August Passed Away Unnoticed' always seems to have a certain poigniancy I can't quite shake, as does 'Cold Evening Colours'. As for live, it possibly has to be 'History vs the Future', always fun to play....

You can only keep/listen to ONE album for the rest of your life ..which album would it be?
Ok, I thought the last question was hard. The answer to this would probably have to be, at this moment in time, The Beatles 'white album'. It's a toss up between this and Abbey Road, but both of them have such a breath of emotional content and range of styles that either one could probably do the job...

Are you living your dream?
To a degree, yes. As a child, all I wanted to do was to be in a band. I used to sit and draw album covers, make up song titles and sing made up songs to myself. So, here I am, 20 odd years later, still kind of doing that but now people are actually listening to us. Maybe living in a dream would sum it up best......
Thanx Epic45!
Epic45 just released a new EP titled "In All The Empty Houses" go out and buy that now, go on Go!..
Posted by Brent at 4:22 PM