"Mix Windy & Carl's droney side with Auburn Lull's synthy atmospheres, vocals mnemonic of Lansing Dreiden, with the over the top production qualities of Ulrich Schnauss and you will get one of the best (if not, THE Best) Dream Pop albums of 2009.. " 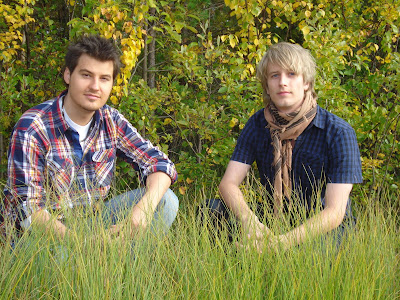 Ecovillage
Celestial Resonance Couturiers
Ecovillage Bio:
Ecovillage is primarily a two-man Psychedelic/Shoegaze band from Sweden. The band members have both been involved with different bands over the years. In 2005 they went on an journey together which changed their view on music radically.
In 2006 they formed the band Ecovillage…with this band everything fell into its right place and it just clicked from the beginning. They felt that Ecovillage was something special so they put everything else on hold and dedicated all their time into their music. Ecovillage music have often been described as euphoric, melancholic, ethereal and very psychedelic. A Good Vibrations, The Association, psychedelic pop kind of affair mixing Shoegaze with vocal harmonies, electronics and some sitar.
Members of the band: Emil Holmström and Peter Wikström. The album features Jonas Munk aka (Manual/Darla Records), Jakob Skott (Syntaks/Benbecula Records/Ghostly International) and Sherlie Matthews (Motown Records).

Hello, how are you?
Emil: I’m doing fine, thanks for asking.
Peter: Enjoying the summer to the fullest, the last 10 days have been really lovely because I’ve got to experince the many beatiful places out in nature that Sweden has to offer. Being outside lets me breathe in a different way.

Apparently you went on a "spiritual journey" of some kind and it changed your lives forever. Now you guys are creating the most lush/rich music I‘ve heard in a long time, can you explain what happened?
Emil: Well, in 2005 we went on a backpacker trip through Asia, but it turned into something much more than just a vacation; near death experiences, spiritual awakening and just total madness... So when we came back we started creating music like there was no tomorrow and the result was our first album "The Quest And That Magic Summer" (don't know if we going to keep that title though). The feeling of the album is quite different from that of "Phoenix Asteroid", it’s less melancholic and much more euphoric.
Peter: The album was scheduled to be released in 2007 but we decided to not release it since we were not satisfied with the production of the album. We consider it to be the best material we have made so far. Some people have earlier versions of it from 2007 on our myspace. We are going to re-record the album and the plan is to release the album in 2010.

No, but seriously your debut album is amazing, thanks for sharing. Did you find recording to go quite smoothly or were there some bumps in the road?
Emil: It’s always hard to create something that we are 100% happy with since we are very critical and pedantic when it comes to our music. Also every track that we create has around 100-150 layers of sound, so it is really time consuming to make it sound good.
Peter: The mixing procedure is really the hard part getting all the recorded layers to sound good together. It is also difficult when, for example, I have spent days of mixing a track and then Emil is not happy with the way it sounds and then you change the mix and it becomes a totally new track. It’s like that all the time when you have that many layers of sounds.

You guys got Jonas Munk (Manual) to help out with the album, how did you meet him originally?
Peter: We contacted Jakob Skott (Syntaks) and asked if he wanted to create the art-work for "The Quest And That Magic Summer" and he send it to Jonas, and since they both liked our music we asked them both to be a part of "Phoenix Asteroid".

Have you guys ever tried playing an acoustic set live?
Emil: Actually this is going to sounds a bit weird, but we haven’t yet played live even once with our band, and our intention is to get on stage late this fall.
We do of course have plenty of experience playing live with other bands that we have been involved with over the years.

Speaking of playing live, is there a US tour on the horizon?
Peter: Not for the moment, but we would love to do a US tour.
Who would you like to tour the most with right now?
Emil: Boards Of Canada
Who are your top 5 favorite Shoegaze/Dream Pop acts of all time?
Peter: In no particular order: Cocteau Twins, My Bloody Valentine, Slowdive, Manual and Lovesliescrushing

You can only keep/listen to ONE album for the rest of your life ..which album would it be?
Emil: Fennesz - Endless Summer
Peter: Our yet to be titled ambient/modern classical album. Will be released 2010 or 2011.

Are you living your dream?
Emil: Life is a dream itself, but sure I am happy about my situation right now.
Peter: I’m constantly evolving everyday as a person and it feels like I’m going in the right direction. As of right now, I’m moving closer and closer to my personal dream and I’m enjoying every moment of the process.
Thanx Emil & Peter!
Ecovillage are currently working on an "ambient" album look for that in 2010 (or 2011), as well as some touring here and there...
Posted by Brent at 6:50 PM