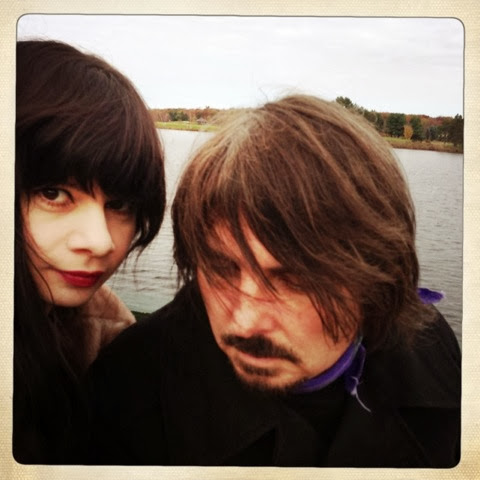 The Stargazer Lillies
Celestial Savants
The Stargazer Lillies Bio:
The Stargazer Lilies slow motion bathing through space music is like sun glistening on the water in sound, ambient rock for daydreamers to bob their heads to. The Northeastern Pennsylvania based trio of guitarist/bassist/drummer/producer, John Cep, singer/bassist, Kim Field, and live drummers EJ DeCoske and Johnny Lancia, bring back the raw rock primal gaze, no bullshit sunshine haze. The gazey dance floor where Soundpool, John & Kim’s previous band, dwelled lies behind them, while The Stargazer Lilies cosmic ambient arena lies ahead. Soundpool released three full-lengths in the last half decade, two on Aloft & Quince, and one on Killer Pimp. They shared the stage and in some cases toured with the likes of: Chapterhouse, Ulrich Schnauss, A Place to Bury Strangers, Asobi Seksu, School of Seven Bells, Black Moth Super Rainbow, Tobacco and Robin Guthrie to name a few. The Stargazer Lilies streamline and minimize Soundpool down to just the bare essentials, ridding themselves of the superfluous & getting down to the essence of what The Stargazer Lilies are: ~butterfly wings, slowly beating guitars enveloping the listener, ethereal breathy female vocals floating on a melody , rocked out bossa nova beats and bad ass bass throwing down the rhythm.​ This new direction, like minimalism, gains strength by taking away and paring the instrumentation down to create vast vistas of sound. Their debut album 'We Are The Dreamers' on Graveface Records was released Oct 22nd, 2013 with Tobacco of Black Moth Super Rainbow curating the release.​

Hello, how are you?
Kim: We just woke up… Having some coffee… Feeling pretty good this morning.
John: Fine… thanks for asking, Ray! Have to say thanks for being a long time supporter of Kim and I!
EIC: Thank YOU for sharing your talent with my ears;]

What are you currently listening to?
Kim: At this moment we're listening to the sound of silence. Lately we've had side 4 of Stars Of The Lid's 'The Ballasted Orchestra' on our turntable on repeat. It was literally on repeat for like 3 days/nights solid after coming off of a string of gigs. Maybe we were too lazy… but it was just suiting our decompression.
John: What Kim said.

What or whom inspired you the most to begin this project?
Kim: A string of unfortunate and sad events led us to start writing a series of songs. Those songs inspired the project. We started The Stargazer Lilies because of the songs we were writing.
John: Soundpool (our previous band) had become too big of a production for the level of success we had achieved… so I think we were looking for a way to strip it down. As I recall the original plan was to have Mark (Soundpool's synth player) on bass and James (Soundpool's drummer) on drums for the new direction. But I think those guys were a hint burnt out on the whole "being in a band" thing… so we forged ahead with the two of us. Kim picked up the bass and we recruited Lauren Andino to play drums live. We currently have two different drummers we play out with, Ej DeCoske and Johnny Lancia

Care to shed some light on your debut LP; theme, favorite track(s), etc?
Kim: It's hard to have a favorite track of your own. They're all like your children. Maybe people have favorite children. But you love them all. Even if they make you insecure, sad, angry etc. Right now my relationship with the songs is more from playing them live. I have more fun playing some than others simply because my stage of playing them is more mature. The first song I learned on bass was "Endless Days" it's still one of my most challenging to play live…. but I sort of love it for that.
John: I think it's a very melancholy album… much more so than the uptempo sort of Shoegaze we were doing in Soundpool. We really poured or hearts and souls into this album more than any other we've ever done. There was a lot going on in our personal lives and I think the challenges we were facing are reflected in the material on this album.

Will you be touring extensively for said release?
Kim: We have a lot of touring planned for this Winter/Spring. We'll be going out on a Graveface Records month long U.S. & Cananda tour in February with The Casket Girls, Dreamend and other Graveface bands. We're touring extensively with Tobacco in the Spring throughout the U.S. as well. Still working on Europe/Asia.

Got any other projects we should know about?
Soundpool is our former project. We're on hiatus now but still writing for that project for some future possible release.

Whom in your opinion is currently the most underrated Shoegaze project right now?
Kim: Oh, boy. There are so many Shoegaze bands. I don't even know all of them there are so many. When we first started Soundpool there were just a couple of hand fulls of new Shoegaze bands world wide. That was back in the days of MySpace and a community started really quickly. We all sort of knew each other via online. We had the chance to go to the U.K. and play a festival in Bristol where a pretty good amount of the original "NUgazers" were playing and were able meet a bunch of the bands in person. Presents For Sally, The Fauns, 93 Million Miles From The Sun, Orange Yellow Red, also Damon And Naomi played that festival… others I'm forgetting since it was a long time ago… That same tour we played with Asobi Seksu and Ulrich Schnauss in London. We'd actually met Ulrich previously since John and I used to throw loft parties in NYC and Ulrich actually flew all the way over from the U.K. to come to one of them since he was so excited about the band line up which was Soudpool, Auburn Lull, Elika and Arms And Sleepers.
Now there are so many bands in this genre I can't keep up with them. There's a lot of talent.  I think it's too hard to pick out one band I think is underrated.
John: If we're talking about underrated bands in Shoegaze… I think we have to mention the band Medicine who along with MBV released a new album this year for the first time in decades. It's a killer album but it didn't receive the hype the new MBV album got. Shoegaze music in general is underrated though… from the very beginning it was overshadowed by Grunge and then Britpop. So yeah… I'd say the genre as a whole is underrated.

What movie would work best on mute while listening to you music?
John: The song "How We Lost" actually goes perfectly with the climactic shoot-out scene in "The Good, The Bad And The Ugly" for some weird reason.

You can only keep/listen to ONE album for the rest of your life ..which album would it be?
Kim:  Probably Stars of the Lid's 'The Ballasted Orchestra'. It sort of makes you feel like you're floating in space. I don't have a "favorite" album, though. I have a lot of favorites.
John: That would be a good way to make you sick of listening to your favorite album!

Are you living your dream?
Kim:  Once we don't have all the stress in our lives that we have in order to just survive and once I don't feel like even with all that stress that we're always teetering right on the edge... I think I'll feel like we're living our dream. We're squeezing dream time in as much as possible in the meantime.
John: There are moments of living the dream… like when we're on the road etc. but overall… we are not yet living the dream. When touring becomes lucrative enough so we don't have to do anything else for income… then I think we'll be living the dream.
Thanx Kim & John ..and Michelle too!
The Stargazer Lillies recently their debut LP, I STONGLY recommend you give that a spin...
Posted by Brent at 4:26 AM