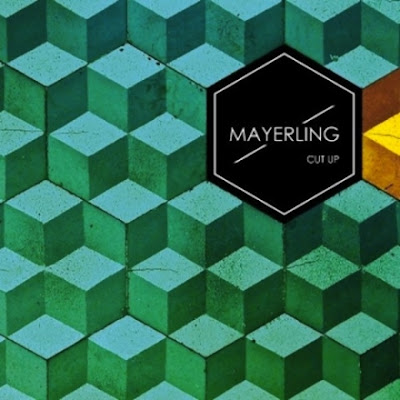 'Cut Up' is Mayerling's debut release, it.. hold on, wait.. this is only their debut?? Whoa. I feel a new obsession developing between my headphones. They assemble (almost) incomparable Dark music I crave? Check. On one of the hottest labels (should be anyways) right now? Check. From France (yeah, I've got a soft spot for all things Parisian/of French origins OK?)? Check. Possibly the best debut release of the year? Che..
Starting with a modulated sounding bell, followed shortly by a French accent speaking in native tongue. Small/quite synths begin to build. The gorgeous drones are becoming more condensed and engulfing, + more synths (of the Spacey variety).. Beautiful drone please don't end, please? Vocals come in, gawd these vocals remind me of someone (I'm not sure who yet, but someone), these vocals are so fu**ing killer (could be an acquired taste, but I think they're nigh perfect). Slowly but surely this relaxing Ambient loop intro that you never want to end evolves into a mopy Pop masterpiece that surprises you with each new layer. This is the general tone for most tracks on 'Cut Up'. If you can dig Dark Pop meets some form of weird Alt-Post-Psych Rock music you will most likely become obsessed with this release just like me. At least listen to THIS, if that's not for you I  give up (on you).
..ck. HIGHLY RECOMMENDED (One of 2013's best./for fans of the Dark arts; it's a must;)
Standout Tracks: ALL. but ESPECIALLY: Salomon's Ring and La Mort N'en Saura Rien (∞∞∞∞)
Posted by Brent at 4:13 PM