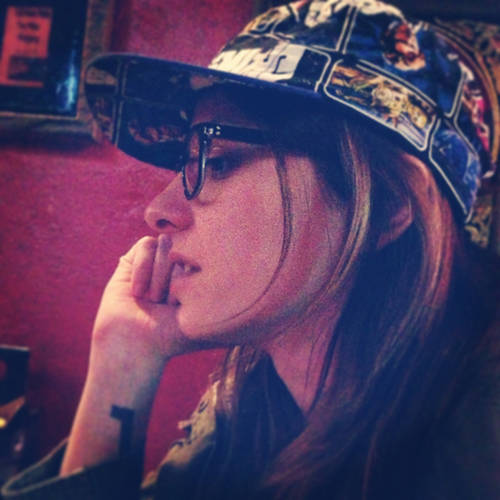 Ellie Herring
Science of Ethereal Fusion
Ellie Herring Bio:
Ellie Herring is an American born electronic musician and producer.  She was born in Tennessee and pursued an MFA in abstract painting from The Pratt Institute in Brooklyn, which she credits as a heavy influence to her music. She now resides in Kentucky, releasing her first EP, 'Flailing In Attraction', with Race Car Productions of Oceanside, CA in 2011. Ellie has gone on to release several singles with her debut full-length, Until It Feels Foreign, in the winter of 2011.  Furthermore, Ellie remembers tap dancing on second base during t-ball games to the INXS ringing in her head, creating mixes on a Sony mini-disc player, Michael Jackson’s Thriller 7” on her Fisher Price record player, and buying a Heart cassette with her mother while eating sherbet.

Hello, how are you?
Doing very well. Destroying lattes and photoshopping armpits (really) for the 9 to 5.

What are you currently listening to?
At this very moment, a preview of Erlend Oye's upcoming release, "La Prima Estate". Also... Machinedrum, Tokimonsta, Beacon, Eats Everything, Brandy. You name it.

Whom or what inspired you the most to begin making music?
Midi controllers and keyboards. I'm a big tech geek so as soon as I even got a tiny portion of my brain wrapped around midi mapping and production software I became sickly obsessed. Then I got into samplers and analog stuff. I guess that's the opposite direction that it happens for most people. Music theory I'd tossed aside when I was a wayyyy too cool teenager and picked back up when I got into music again. I really never thought that it would be adapted for anything else or that I would even be able to access those memories again.

Care to shed some light on your recent LP 'Kite Day'; theme, favorite track, etc?
The title is taken from one of my favorite memories as a kid. My Dad teaching me to fly a kite one afternoon on a weekend so I'd know what I'm doing at school for Kite Day. Flying a kite for the first time blew my mind a little I think. Running around to keep it in the air. Kites live in the air. They don't otherwise. My favorite track is "Thinking JFK", I wrote it in one shot, in the middle of the night when I was thinking about sudden deaths that never have explanation or resolve. That aftermath. It's not necessarily about the assassination of JFK, the title is more of an allegory. "10 Hours In Prague" is a close second. It's based on a reoccurring dream of someone that is very dear to me. That track is my translation of the dream.

Any reason you didn't stay with Phantasma Disques for this release?
They tend not to do digital releases. Just runs of CDs, and I wanted to go both routes with 'Kite Day'. My first release, "Flailing in Attraction" was digitally with Racecar so I stuck with them. They're rad guys. BF4ever.

Will you be touring extensively for said release?
I hope so. The planning is in the works now.

Got any other projects we should know about?
An LP later this year or early 2014. That really depends on touring though.

What movie would work best on mute while listening to you music?
I first read this as "what movie do you put on and mute when creating your music?"  because that's something I do. But it's not a movie, it's Northern Exposure the TV show. The characters and scenery are comforting.  Cicely, Alaska, the Brick bar, and KBHR 570 AM. My answer is Gattaca though.

You can only keep/listen to ONE album for the rest of your life ..which album would it be?
Underworld's 'Oblivion With Bells'.

Are you living your dream?
Very close. I feel weird saying that because I'm so thankful for having such great friends and support, it feels like I should be saying I'm living it.
Thanx Ellie and Matthew!
(I believe) Ellie is currently laying low (presumably working on her next release/tour itinerary)...in the meantime...
Posted by Brent at 4:31 PM