REVIEW: Slow Head - Fire Is The Mouth Of The Snake 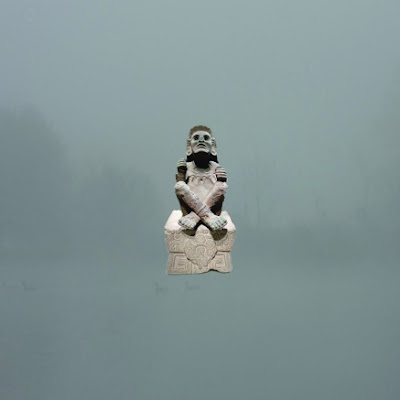 Although Slow Head (and his many other monikers) has been at it for a bit now I really didn't come across his music until last year's (super overlooked/underrated) 'Night Glitters' release.
First things first, although the artist is on the label/powerhouse-conveyor of awesome underground Dark/Experimental music; Disaro, Slow Head is NOT Drag, Slow Head is also NOT Witch House. Upon first listening of some his older material you might think this (in a way--and still maybe..idk?), but really his sound (to me) can be best described as "Spooky IDM". On 'Fire Is The Mouth Of The Snake' Mr. Head ventures a little further away from the spooky aspect though and explores head-tripped/hallucinating drugged-out Clubbier vibes instead. To be honest, this release sounds pretty much polar opposite of 'Night Glitters' (which I kinda wish wasn't the case (sometimes--I also love it though), but I'm happy that he's open to new ideas). Take a stripped down Clark album, mix it with a dash of Aphex Twin's earlier Ambient works add a few extra Dark tones and "Fire Is The Mouth Of The Snake" might be your end result. I actually really like the simple/minimal vibe of this release. And based on the differences in tones (from beginning to now) I feel like we've got a few more awesome albums like this (and better) coming to us..(very soon?)
Chill/Dark IDM , what's not to like about that?
Standout Tracks:The Pearl (this reminds me of the "golden era" Warp sounds), Fire Is The Mouth, Plumed Serpent, Jade Tongue, Twelve Macaw (Shisa Remix), Alt. Mode (Slow Head Remix)
Posted by Brent at 5:30 PM