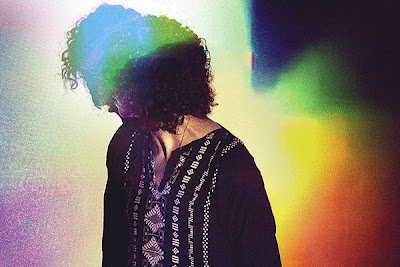 Hello, how are you?
HIYA, I'm funtastic a'zemeny wooooo!!!!!!!
What are you currently listening to?
KWJAZ - because it's futuristic waiting room music, oddly I seem to enjoy this lately…actually lets be more precise, it's just perfect to listen to whilst responding to interviews. James Ferraro's more ambient albums are tropically psycho. He comes up with unbelievably stimulating album/track titles that seem to set a visual more than a sound world - always on the threshold between hypnotic, boring as fuck, and incredibly Los Angeles-style creepy. "Palm Trees and Wifi" and "Dubai Dream Tone" are two amazing track titles from his newish album "Far Side Virtual." Clear is meditative yet abrasive - paradoxical music is where it's at!
Whats with the band name?
Vinyl was a nickname, first given by a fellow promoter at The Kollective agency in Salt Lake City, UT - I used to design flyers and book local bands. It's actually how I started collaging, doing flyers for touring & local shows around Utah.

When did this project come about?
Vinyl Williams with its current members is a little over a year old. Ian Gibbs (current guitarist) had been listening to my music for years and years, ever since my first demos before Vinyl Williams existed. I finally ended up jamming with Ian after running into him and long time friend Nikita Arefkia (current keyboardist) at last year's FYF fest in LA. Just after one rehearsal with Ian I realized he knew every song I had ever written on every instrument... he actually knows how to perform my music better than I do. Evidently he was a perfect foundation to this new reanimation of the band. I met the rhythm section (James Lake and Billy Winger) around the same time at CalArts, after which the band was fully complete.
The whole project is about 4 years old. It took until 2010 to find the right turquoise vibes, but from then on I began releasing free albums and making short EPs. Even before then from 2008-2009 Vinyl Williams toured 3 times around the US, we toured every state west of Tennessee. We did it totally independently and were able to break even.

Care to tell us a little bit about 'Lemniscate', themes/personal favorite track(s)?
It was my first attempt at a chronological journey where I aimed at transporting listeners. It's not a conceptual album, it's open enough that individuals provide their own unique concepts and associations to the arbitrary themes that occur throughout the album. The lyrics were written fluidly, as poems before they were plugged into songs. This may be the cause of the sporadic-style melodies that occur throughout the album, as a result of syncing melody to pre-made poems. Parallel to stream of conscious writing, the words of separate songs end up linking together non-deliberately, in a pattern that traverses a semblance of worldly things seen by unworldly eyes.
I think "Open Your Mind" is my favorite, not sure why.  Maybe because of the ambient pad that takes up the second half of the track slowly falls down in pitch over the course of about 3 minutes, until the end where it reaches a half step difference. There are moments where harmonics jump out randomly, like spikes. I like stepping outside of equal temperament tuning, this is the only track on Lemniscate that does so.

Any plans to tour internationally for said release?
Early next year is looking likely for a UK/EU tour. This December was a possibility for a show in Paris and a few extra surrounding shows...truthfully I want to spend December driving from Los Angeles 1,000 miles south to the temple of Tacal in Guatamala. It's a hard choice to make between a free European vacation performing dreamy pop music or a spontaneous & equally dangerous Guatemalan expedition into the unknown.

Got any other projects we should know about?
Salonislam is a new music portal I've just begun, which will release music from other band members in Vinyl Williams as well as associated partners who also space cruze. Projects include Dream Trees (Ian's band that sounds exactly like the name) Fynndlit (James's noise project) Hidden Music (noisy disco improvisations with several guest musicians) Bijou (Billy's dreamy electronica) Koala Temple (satirical teal pop) and more! Also, I'm planning a video exhibition to open at different locations throughout LA at the same time. A massive show with 10+ video works projected at the same time on the same wall. It will be like a never-ending video jam. I also really want to perform what Sean Patrick Maylone (promoter in S. Korea) talked about while we were in Korea on tour, which would be to have two really greasy gross looking construction cranes arm wrestle to the death. Masculinity!
What movie would work best on mute while listening to your music?
Maybe 'Enter The Void', because the dialogue is dumber than an ice salesman, but the visuals are spectacular. And it's quite blissful, purplish-red and teal and gold. Another candidate would be 'The Color Of Pomegranates'... as well as this Polish masterpiece 'On The Silver Globe'.
You can only keep/listen to ONE album for the rest of your life ..which album would it be?
'High Noon' by Afternoon Penis.
Are you living your dream?
Until I'm able to levitate I'm about as close as I can get.
Thanx Daniel + Lionel!
Vinyl Williams recently released an awesome album I recommend you check into, also he's touring the West Coast ..if you happen to be in that area...
Posted by Brent at 4:56 PM