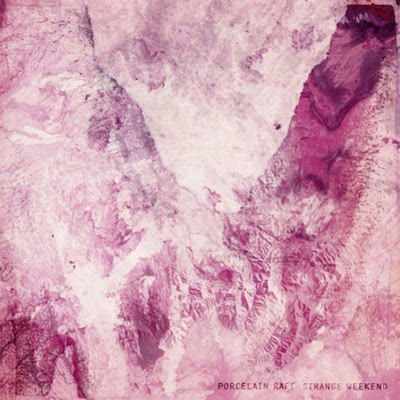 8 out of 10
Find it here.
Porcelain Raft (Mauro Remiddi) although just now releasing his debut LP 'Strange Weekend' has actually been floating around the music scene for years now (over 10 I believe). He's released a handful of singles/EPs via his Bandcamp (pay attention to this beauty/one of his best in tracks my opinion) and actually has a pretty rich/cultural musical upbringing that most likely formed him into the man he is today (seriously check into this guy's bio).

Porcelain Raft, an "up to date journal" so to speak, sways between Bedroom Dream Pop to Post Modern Psychedelia to Lo-Fi Ambient music. 'Strange Weekend', much like his previous releases, is little all over the board really. But all of those sounds compliment each other quite nicely actually and stay true to his idea of writing a song based off of current thoughts rather than current happenings (there's a difference, trust me). Right now he's on tour with M83 in Europe and I think that makes tons of sense, hopefully that will give you a stronger idea on PR's sound? 'Strange Weekend' starts off with a tightly layered drum machine beat fading into to a "Cure-esque Dream riff" followed shortly by a heavenly synth and then the bewildering/sometimes melancholy vocals of Mauro. Every sound is rigorously configured to maximize it's effect on the listeners attention. Some Atlas Sound comparisons I'm sure will arise, if none already. But more than just another "prolific Indie (Bedroom) Pop" Porcelain Raft is any insanely talented human being with an ear for finely tuned audial balladry that I crave every once and a while (all the time).

One of '12's best.. You should probably get this one, you can thank me later.

Standout Tracks: Drifting In And Out, Is It Too Deep For You? (damn smooth), Put Me To Sleep, Backwords, Unless You Speak From Your, If You Have A Wish (a beautiful (and short) sweet mess)
Posted by Brent at 6:07 AM