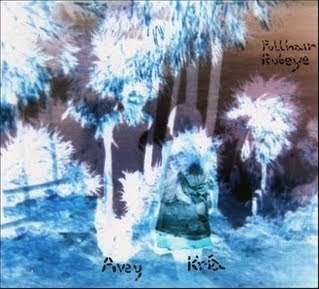 9.75 out of 10
Find it here.
Another album I've been meaning to review for a while.. Finally it seems like an "appropriate time". When this release originally came out audiences/general critics bashed it to hell, almost no one cared about it and I'm sure it ended up many $1 bin's across the world. The weird thing is, to some extent I would agree with the negative remarks:[ ..But that's BEFORE I dug deeper/took the time and reversed the entire album back to it's "original form". Kind of like a "re-birth" if you will, considering this album is supposedly about "re-entering the womb", so I guess this is exiting the womb..?

Please take notice at the word "R-E-V-E-R-S-E-D" mentioned above (in the title). I will briefly talk about the original released version of this masterpiece, but mainly it will be about the R-E-V-E-R-S-E-D version. When "then husband and wife" Avey Tare (Animal Collective) and Kría Brekkan (Múm) put their heads together they came up with "Pullhair Rubeye", a curiously titled album they somehow suits the nature of the beast quite perfectly. The album came out in 2007 (a good year for music as I recall) and was right away bashed for it's chosen recorded process. That's right, after the duo had written such a perfect composition they then reversed it and sold it. Why? Why would anyone do that? To make you work harder to enjoy the true nature of music? Is that it(music)'s all just pleasurable/odd & peculiar noises anyways? Maybe just to annoy you? Neither really, as mentioned above it's about "re-entering the womb". The sounds that they had birthed weren't ready for the world yet.. Celebrities tend hide to their babies for a little bit after they're born..right? Some of us hated it and are never going back (you really should reconsider). Some of us knew exactly what to do, reverse the entire album and listen to it that way (even if it's intended for that purpose or not). And here's what happens; Kría's over the top adorable vocals matched with Avey's faint "Animal calls"/random other chants lay beside a riverbed of fragile acoustic beauties and simplistic adolescent beauty. "Lo-Fi Freak Folk" seems like an appropriate genre, but it also sounds pretty polished so we'll just say "unique";] What this album does so perfectly is applies the simplistic/child-like nature of earlier Múm releases and melds them perfectly with the earlier Animal Collective sounds (think 'Sung Tongs'), yes it's as perfect as it sounds. It really is a shame, especially on some levels if you don't understand the nature of 'Pullhair Rubeye's' charm, that this release came out reversed. Had it been the other way around I think more people would've been inclined to reverse it and hear it that way eventually. Don't hide this beauty from yourself anymore, it's only fair that we should have to "work so hard" for something this magnificent. This album has been my "go to album" for almost 4 years now, whenever I'm in a laid back/"weird" mood I come back to this. 'Pullhair Rubeye' is for fans of fireside folk entangled with surreal psyched out jubilation. Sooo good.

Standout Tracks: All ESPECIALLY; Sis Around The Sandmill, Opis Helpus (probably one of my favorite things any Animal Collective member has ever done ever), Who Welsses In My Hoff, Lay Lay Off Faselam, Sasong (no need to slow it down, so adorable)
Posted by Brent at 5:57 AM