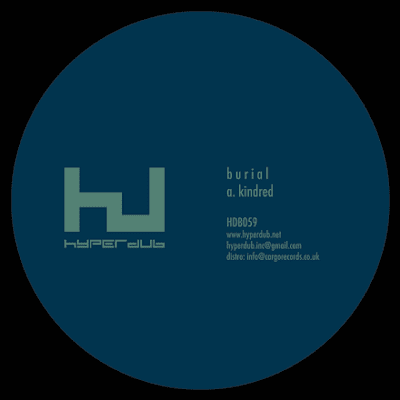 8.5 out of 10
Find it here.
For all the hype that surrounds Burial, you never feel as if it's false or overblown. You may try to excuse it as a product of the curiosity surrounding his identity or the media merely trying to latch onto some new sound, but that would ignore the truth. No one can deny “William Beven”'s place as one of most important producers at work today, and no one can deny there's only one reason to his startling success: the music.

Burial's newest release 'Kindred' features only three songs yet clocks in at thirty minutes in length. Imagine a stretched out 'Street Halo' with a stronger focus on atmosphere and an absence of superfluous elements, and you have 'Kindred'. However, what really separates this EP from his previous works are the songs' peculiar arrangements. The opener “Kindred” is divided into half-sequenced movements. It begins with distant crackles, gloomy strings, and indiscernible pitch-shifting vocals. Then it slowly moves into crunchy 2-step beats, murky basses, and various vocal phrases that ebb back and forth, shifting from silence one moment to complex productions the next. “Loner” follows in the same fashion of stop-start beats, but somehow the rhythm disappears from our consciousness. A glimmering synth arpeggio flows unto our ears like ribbons of light, breaking through the darkness and decay set up in the previous song, blinding us with its beauty. “Ashtrap Wasp” tries to move us back into the night, opening with a synth that sounds as if it's slowly surfacing out from the blackest depths. But we are caught by the song's rising synth and piano lines that turn the song into the EP's most danceable, uplifting moment.

If you're just looking for the signature hallucinatory beats, spectral vocals, and crackling noises that to many define Burial, they are all surely here. Don't be fooled, though; 'Kindred' is by no means a mere rehash of the style Beven defined several yeas ago. 'Kindred' reveals an artist exploring his peripherals, thinning his sound down to a core impossible to avert your gaze from, reminding us of the true motive behind the hype that surrounds him: the beauty.

Standout Tracks: All
Posted by Brent at 6:20 AM