REVIEW: Masquer - Cover My Face As The Animals Cry 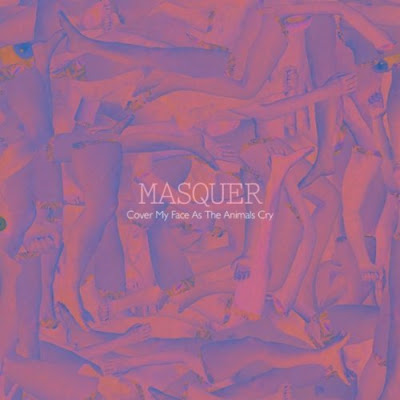 7 out of 10
Find it here.
I'm not sure if I can link back to whomever/whatever first introduced me to Masquer, but I would like to say thank you to that source:) Masquer are a duo, Kicki Halmos (vocals/synth/programming) and Pelle Lundqvist (bass/guitar), out of Stockholm. They blend elements of Shoegaze with Indie Electronic and Dark Pop sounds, a "peppier" Cocteau Twins almost comes to mind when describing them (or maybe Tamaryn or even Drakes Hotel;). Their debut LP, "Cover My Face As The Animals Cry" is pretty much pitch-perfect Pop music from beginning to end. In-fact/just so you know, a couple of the singles from said album were remixed by a few popular acts (including The Field--whom they've toured with). So why hasn't this band caught on yet? Why am I not hearing more about this project from other sources? Why are they so overlooked?? WTF people, get on the (masquerade) ball!

Pop music can be accomplished in only one way (maybe just my opinion); simplicity & purity. Masquer have accomplished both of these fetes. On top of that they have also added elements of darkness and atmospheric tranquility. Pop music doesn't always have to be about "sunshine & happiness", sometimes you have to except and absorb those darker moments to be truly happy. Think about bands like The Cure or Echo And The Bunnymen, what they did way back when, they are a direct reference/influence to what Masquer is (in-theory) trying to attempt today. Masquer utillize synthesizers, guitar/bass, drum machines and Kicki's angelic vocals (which really do hark back to the earlier days of 4AD) in the best possible way. To put it simple; Masquer are Synthy Shoegaze in it's most raw form.

Assuming women with a powerful/unique voice have an effect on you Masquer will be right up your alley. Their music definitely perfect for particular moods, and they shouldn't be overlooked anymore. Masquer's debut 'Cover My Face As The Animals Cry' is a promising look into this band's (hopefully fruitful) career/future. Expect to hear more about these guys from other sources very soon.

Standout Tracks: Bang Bang, Happiness, Be Gone, There Was The Smell Of Grease
Posted by Brent at 6:02 AM

Email ThisBlogThis!Share to TwitterShare to FacebookShare to Pinterest
Labels: cover my face as the animals cry, dream pop, indie, masquer, shoegaze, the field