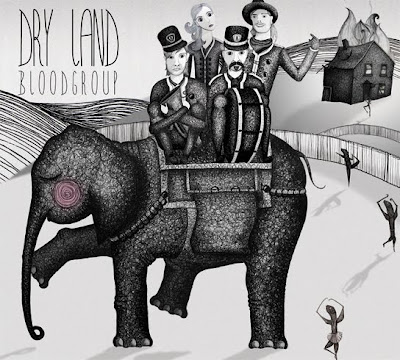 7 out of 10
Find it here.
Bloodgroup are a group of young Indie-Electro music makers from Iceland. They formed around the year 2006 and were quickly noticed after that, they are now considered one of Iceland's "best live acts to see". "Dry Land" is the group's second full length album, and much like the debut is chopped full of catchy synth hooks, perky/danceable drumbeats, sterling vocals, and enough "pop" to hook in anyone from the very first listen.

I'll admit it, I had never heard of Bloodgroup until a certain other Icelandic composer told me about them, however, I immediately checked them out once I (finally) knew of their existence. You see, I not only have a HUGE weakness for French music, but Icelandic music as well. Generally most of the music I hear from Iceland is downbeat & melancholy Ambient/"sad bastard" music (which is usually exactly how I like it), so when I found out Bloodgroup was "upbeat", "perky", and apparently AMAZING to witness live I had to know more. After soaking in their music on the web for a bit, I knew I had to have an entire album (Thanx BG!) and once I finally had said album in hand I knew I was in for a treat. Bloodgroup blend dancey Euro Pop with funky Electro Pop beats; the synthesizers are heavy, fun & sleek (exactly what you need to soundtrack a fun day), the vocals (mostly female with a few male accents) sound extraordinary, and the beats (rather than just your average 4-count sound) are unique and audacious. Really, what you have here, if they get the stateside attention they deserve, is an Indie Electronic dance smash-hit album. There a few "slower" moments as well, to say that it's just a "dance album" may be being a little too broad, it's an Electro album most definitely. So keep in mind, although it's mostly upbeat, it doesn't mean you couldn't chill out to "Dry Land" as well. I think you're in for a treat once you finally get a moment to wrap your headphones around this overall pleasing experience. Ok, my neck hurts now from all the bobbing, excuse me while I go get this massaged..

For fans of Chromatics, Sally Shapiro, The Knife, Figurine, and just all around catchy Electro-Pop music. Recommended.

Standout Tracks: My Arms, Wars (like the strings in this), Pro Choice (catchy-catchy), Moonstone (love the vocals and once again, strings), Battered (LOVE THE BEAT ON THIS ONE)
Posted by Brent at 3:31 PM