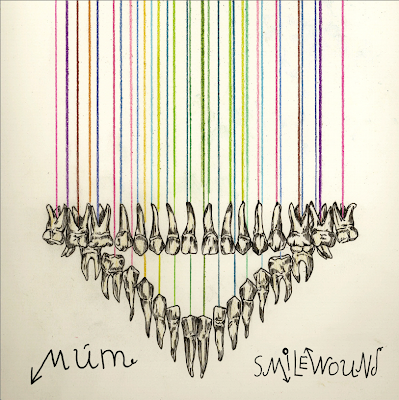 7.75 out of 10
Find it here.
For a band as consistent as Múm you would think more people would be obsessed with them by now* (*I know they have their fans, but I still think there isn't enough chatter there). Since 2000 Múm have been putting out some of my favorite Icelandic records. They're playful yet elegant way of mixing "child-like" Folk music with Experimental Electronics is something I constantly crave.
On average the time between albums is usually only about 2 years, this one ('Smilewound') was about 4 years in the making. And, as usual the wait was worth it. It almost seems impossible to stay as consistently surprising and amazing as Múm always does, especially considering the constantly revolving band line up (something like 15+ band members have come and gone throughout the years). Múm's sound has definitely changed/evolved a little bit though.. In the beginning it seemed delicate Folk-tronica was this band's niche, they carried on with this tradition for the first few releases, and then (in 2007) they released what is possibly my favorite record of theirs 'Go Go Smear The Poison Ivy'. That album was (almost) something completely different for them, heavily influenced by the Experimental side with more precocious "Folk" sounds. It's still one of the best albums I own. Flash forward some years later (in-which they released 'Sing Along To Songs You Don't Know', which was decent, but not my favorite of theirs) to now and they are back at it with 'Smilewound', which is closer to the early years of Múm mixed with a few of the elements heard on 'Go Go Smear..' and what seems like a stronger leaning toward "Pop" elegance. I will assume you've heard Múm by now right?? You better have. There really isn't more can I say about this band that hasn't already been said. I absolutely love this release, on 'Smilewound' we once again see Múm focusing on what they do best which is bringing out the inner child out in every listener.

Múm fans already own this, you should too. Recommended.
Standout Tracks: Underwater Snow, When Girls Collide, Slow Down, One Smile, Eternity Is The Wait Between Breaths, Sweet Impressions, Time To Scream And Shout, Whistle (With Kylie)
Posted by Brent at 4:39 AM