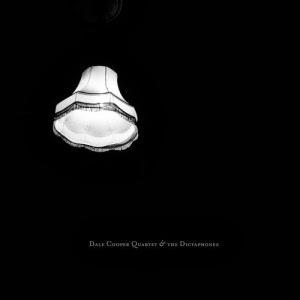 Dale Cooper & Co. wanted to prove something on this release. They wanted to show you they're more than just another "Dark Jazz" ensemble.
Make no mistake, the Dark factor is still highly present on 'Quatorze Pieces De Menace'. Yes, there are those Jazz elements as well.. The major difference between this release and previous efforts is a stronger focus on menacing drones and white noises (reminiscent of The Caretaker, L. Pierre, and The Haxan Cloak) as well as a smaller focus on loud guitar rock (of some sort). Dale Cooper & Co. shift the sound direction from "just" menacing drones into rotting buildups that portray audial decay in a different light. Once past the 21 minute intro track you are thrown ear first into smoothing vocals followed by a lingering synth and.. saxaphone (did I tell you I love the saxaphone?). The tone then shifts again into something louder and more attentive; the fuzzy side of guitars if you will, this may be Dale Cooper & Co. at their most aggressive. Catch your breath, the mood loosens up again..back to bleakness, then back again to something heavenly and possibly derranged. This is what I love about these guys, listening to their music is like watching/slightly celebrating the beginning of the Industrial age evolving into the great depression, in slow-motion. The visuals that come from this release are extremely intense under the proper settings. Am I saying this album is "dark & depressing", yeah..kind of, in a good way though of course;] I would say It's not quite cold enough for this release yet, but those weeks are just around the bend. No matter the season, much like everything Dale Cooper & Co. have had a hand in, this release is quite magical and mysterious. Seduction is only a pair of headphones + button click away.
Literal goosebumps when listening to this album at night with all the lights off. RECOMMENDED.
Standout Tracks: Brosme En Dos-Vert, Nourrain Quinqet, La Ventrée Rat De Cave, Il Bamboche Empereurs, Céladon Bafre, Lampyre Bonne Chère
Posted by Brent at 4:29 AM