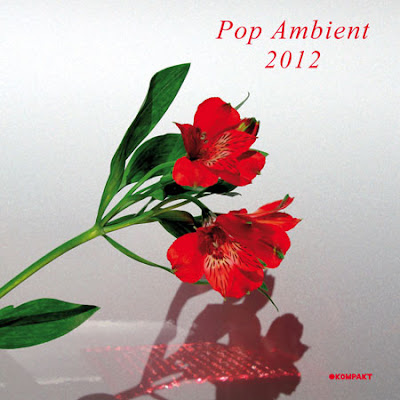 6.5 out of 10
Find it here.
Eleven years ago, Kompakt's Pop Ambient series became an outlet of innovation for a label still shaping its own sonic thumbprint. A fruitful origin as the showcase of Kompakt's rich possibilities garnered the compilation much acclaim, but over the years, as common with releases of such nature, a veil of static devotion has shadowed Pop Ambient's name. Though the series has propelled the label and artists like The Field to the foreground of electronic music, those who call Pop Ambient home like Wolfgang Voigt (Gas), Jörg Burger (Triola), and Aksel Schaufler (Superpitcher) have seen their annual contributions fall to now old habits.

In the opening tones of 'Pop Ambient 2012', echos of Wolfgang Voigt's trademark soundscape already arise. Its bleakness fabricated by orchestral samples diffused in a hiss of decay continues into the next track, Superpitcher's “Jackson,” where a glacial three-note melody overplays a voice faintly stretching in the background. As the song progresses, a flowing piano line eclipses the cold electronics, unearthing a bright harmony. On Morek's “Pan,” clipped keyboards blended in a collective of droning strings retains this colorful atmosphere. Even though it slowly grows throughout the album, the taste of more direct and structured compositions only flowers on Voigt's second contribution, “Rückverzauberung 5.” The song's swinging strings, tumbling vibraphones, echoing pianos, and glistening harps forge an eerie melody that sounds like an orchestra floating in some boundless space, a symphonic odyssey ripped straight out of The Shining.

Unfortunately “Rückverzauberung 5” resonates as the sole track on here with a clarity of vision. Every other song is just a mere glimpse to the hybrid between classical instrumentation and ethereal ambience Pop Ambient has been nearing over the past decade. And they're glimpses that only make the listener beg for more. Not to say this year's edition won't satisfy the casual listener; just don't expect much that Kompakt hasn't already thrown our way.