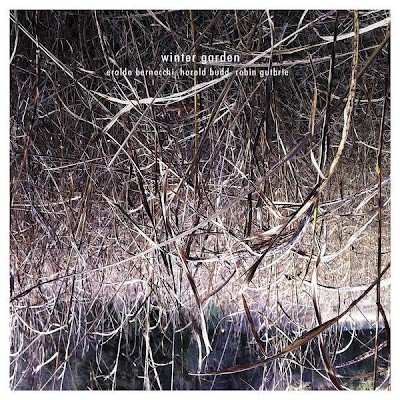 7.75 out of 10
Find it here.
Earlier this year, Harold Budd's "In The Mist" showed the world the famed Ambient artist at his most raw and expressive. The album reflected a Budd free from the guise of reverb, where for the first time each of his compositions were wholly dependent on structure and harmony. But in Budd's newest album, "Winter Garden", the minimalist's lush soundscapes have returned with the help of Italian-producer Eraldo Bernocchi and ex-Cocteau Twins' Robin Guthrie. 'Winter Garden' does not mark the first time Budd has worked with either of these composers. Guthrie and Budd's partnership began six years ago when the pair released their soundtrack to Gregg Araki's "Mysterious Skin" – a debut which perfectly conveyed the film's sublime blend of intensity and calm. 2005 was also the same year Bernocchi and Budd released their first split: the dark and almost Post-Industrial "Music For Fragments From The Inside". Darla Records's "Winter Garden", however, is the first time these three artists come together on one release. What arises out of the collaboration is a sublime fusion of Bernocchi's icy, claustrophobic productions with Budd and Guthrie's warm, lush harmonies.

'Winter Garden's' first minutes echo a tamed resemblance to the former discography of Budd – a vast soundscape layered with skeletal, flowing piano lines. However, as the album moves into “Entangled,” Budd's collaborators finally take their rightful place, quickly evolving the album into one of much higher intrigue. The song starts with Bernocchi's pulsing bass, then continues with Budd's eloquent piano overlaying Guthrie's droning guitar. None of the three members overwhelm the other; each play with a masterful calm and balance. However, to hear the full extent of this fragile fabric of sounds, look no further than “Stay With Me.” In just over five minutes, “Stay With Me” curiously blends an epic structure with bare minimalism. It begins similar to the rest of the album, but in the piece's final two minutes, a shimmering techno beat swells. Washes of noise envelop you in a sonic whirlwind rarely experienced with such subdued music.

The album closes with “Dream On,” an already routine showoff of piano and guitar. It's songs like that, however beautiful they may be, that inevitably weaken 'Winter Garden'. Too seldom does Bernocchi intersect his own elements to forge a palette of noise separate from the one explored on Guthrie and Budd's previous splits. It's this shortcoming which forces you to view this release as a mere glimpse of the trio's abilities. However, like in the album's title itself, the music of 'Winter Garden' holds a peculiar paradox. At first it is bare and skeletal, cold and desolate. But within the melodies and vast expanse of the superb interweaving of sounds lies a hidden garden of noise. It's a stillness waiting for you to fall into and disappear, to become lost in a dimension only masters like Bernocchi, Budd, and Guthrie can create.

Standout Tracks: Entangled, Harmony And The Play Of Light, Heavy Heart Some More, Stay With Me
Posted by Brent at 6:41 AM