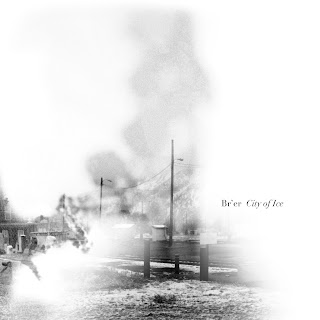 8 out of 10
Find it here.
I'll admit I didn't know much/anything really about Br'er prior to about a few months ago, but I'm certainly kicking myself for it. 'City Of Ice', the "group's" second full length is a tribute of sorts to their homeland and it's many woes. It is an album filled to the brim with dark, drenching emotional/fairly incoherent noise and Industrial soundscapes. To be honest, it sounds a lot like Xiu Xiu, only more "Industrial" kind of like Swans..

'City Of Ice' may not be for all, but for the rest of us with a morbid curiosity for melodramatic sounds it feels/sounds perfect. Equal parts accordion, synth, drum pads and a few live ones too (I think), ominous strings and precarious horns, "weird noises", sparse plucky guitars, and "theatrical" (seems like the best way to describe these kind of) vocals, 'City Of Ice' is a beast that is driven mostly by beauty, it is dark, it it s a bit perplexing, but it's damn artistic and pretty to me. Seems like a decent soundtrack for these grayer days ahead of us.

Recommended. Go get this and go see the band, introduce yourself to Ben (he's a cool guy). We need more artists as daring as he is.