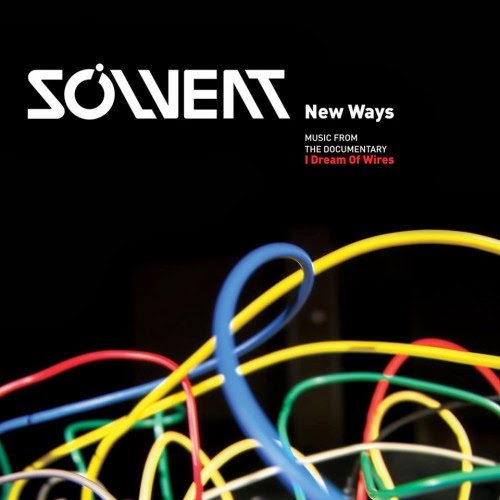 One of my favorite labels of all time is Ghostly (this is no secret). During the first few months of my intro into this obsession I was discovering some of my favorite artists of all time and making sure I acquired everything I could get my hands on. One of my favorite artists from this time (and still to this day) was/is Solvent. Now (back) on his own label; Suction Records, Jason Amp is releasing a soundtrack companion piece to a really amazing (possibly the best) documentary I've ever seen on contemporary Electronic music's creator; the synthesizer.
Whom better to pick than Solvent when it comes to scoring* a documentary on the synthesizer right? (*as well as producing) Actually I'm gonna be honest, I always thought Jason (Solvent) utilized older synthesizers (rather than synthesizer keyboards) when it came to writing all his music, it's (his music) always had that vibe. While watching the documentary 'I Dream Of Wires' it [Part Two] mentions Jason was never really too influenced by the ancient art of wire crossing. In-fact he was utilizing vintage keyboards (aka synthesizer emulators). One of the goals from this film was to get Solvent to make an album employing this "ancient art form". By the end of the film Jason has a new love/respect for this process and from what I can guess will begin writing a few more albums this way (assuming he can find these hard to find/afford intriguing instruments). When you listen to a lot of instrumental Electronic music you might not always be impressed as it can be hard to tell who is playing an actual instrument and who is playing something outside of the box. From watching this film ('I Dream Of Wires') you can almost tell instantly who is and isn't. True synthesizers have this warm, ever changing tone (somewhat unpredictable), that can't be emulated by a computer. To truly understand this art form I highly recommend you go out and get the documentary as it gives you a much deeper respect for the process. Assuming you already know everything there is to know about the synthesizer there is no way you can listen 'New Ways' and not respect what's going on.
'New Ways' is Solvent doing what he does best, which is creating kitschy Electro Space Pop with an engaging twist, this time around with a new wired obsession.
Standout Tracks: Themogene (I Dream Of Wires Theme), Quantimations, Elephant Generators, Burn The Tables, Pattern Recognition, King Vincent
Posted by Brent at 4:01 AM