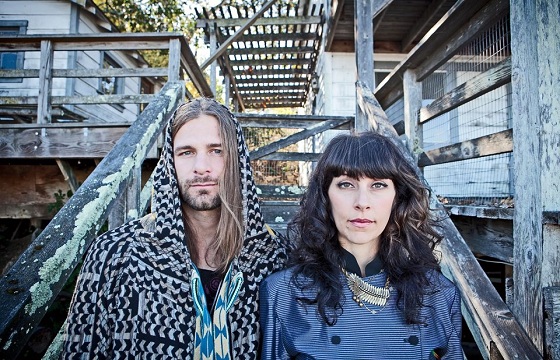 Tone Of Arc Bio:
San Francisco producer Derrick Boyd aka Dead Seal, now Tone OF Arc a duo/band production with partner/vocalist Zoe Presnick have been making music for most of their lives, two of those special individuals possessed with a wide range of musical expression. Tone Of Arc brings a glimpse of real musicality to the underground tech house and indie house scene, something rarely experienced on the dance floor. In the studio they have carved an austere path of "Nuclear Winter" atonality and Skinny Puppy theatrics to create, what could be best described as, "other worldly". They also sing, play guitar, bass, and keys and it's this vast sea of musical expression that creates a sense of a Grand-Guignol cabaret for rivet heads. This sense of bravado and daring blurs the line between traditional live performance and the microprocessor obsessed futurism. Tone Of Arc's powerful stage presense drawn from old school cats like Iggy Pop, The Clash, and Bowie helps to partially define the originality of his music. Boyd himself describes these new directions in sound as discovering the infinite within the mortal remains and posits that this is the dichotomy of existence. Even the alias Dead Seal is part of his philosophy acting as "a symbol of my past, present, and future lives- reminding me that I am more than just a man." Tone Of Arc, in short means for the sound of the laws of creation, a name born from the wonder of the sound that holds all things in the universe together.  Boyd and Presnick have been recording junkies since their teens. Boyd has created a volume of more than a two hundred songs and tracks which he jokingly refers to as his "Dead Seal Scrolls" . In the midst of all their activity, a debut full length album on the ever expanding inspirational house record label No.19 owned by Nitin and Jonny White of Art Department is due at the end of summer in 2012 with 3 Ep's to be released before so marking a long and anticipated wait of 2 years dedication to execute a perfect album release. Come short they have not and their live set completes the experience %110.  So Why has so little been released as Dead Seal and why the change of name to Tone Of Arc? Boyd responds in his own inimitable style, "There is always room for improvement and I am really hard on myself and demand a lot of myself before I die. I have kept my music a secret for so long that it was too early for me to have any real accomplishments till recently. But I assure everyone that the best has yet to come, I'm just getting warmed up with a name change to match the level of achievement. 'Bout time after 200 hundred songs and twenty six years of hoarding bombs. "Music takes a lifetime, you can never stop once you have chosen to inspire those around you I just never got around to selling myself cause I wanted the music to bring me to the right people. I have always trusted in the light and it's family of open hearted genius to bring me home".

Hello, how are you?
I'm great. Very tired and working hard, but great.

What are you currently listening to?
Nothing. I have been on tour for the past couple months so the silence is bliss. I stopped buying music and listening to music because I don't have time for it at the moment. I miss my studio so much that when I get home for a couple days at a time about once a month I lock the door to my studio and disappear. I don't come out until I have more songs for the live show.

When did this band come about and did you have a planned sound you were going for?
The band came about when I fell in love with a closet singer named Zoe Presnick. We joined forces and evened each other out. The sound just evolved from there to be more well rounded and lighter on the soul without being too cliche or cheap.

Care to shed some light on your latest release 'The Time Was Right'; theme, favorite track, etc?
Favorite song on the album would be "The Time Was Right". Its my most musical and thought out peace. I don't even remember making it though. It just was there one day and a force to be matched. I wrote it making a vow to make purposeful, meaningful songs. The rest of the album came one at a time after in a period of five years with a couple hundred songs in between.

Will you be touring extensively for said release?
Yeah, I'm booked through the end of October four days to four weeks at a time on the road all around the world. It's a trip to be home with no job and making music to escape the rat trap and then watch your escape become the cheese in the trap. What sets you free is being positive and not letting the road break you. At insanities limit I always say to myself "this is what I always wanted and came here to do so do it or abuse your spirit with a 9-5".

If you could pick 3 artists (dead or alive) to remix your work whom would you pick?
Frank Zappa, Pink Floyd, and David Bowie. But I think they would make remixes like I do and just make a completely different song. Some people hate that. I like it.

Got any other projects we should know about?
A second album, and hand modeling.

What movie would work best on mute while listening to you music?
'Silence Of The Lambs' of course. :)

You can only keep/listen to ONE album for the rest of your life ..which album would it be?
Pink Floyd's 'The Dark Side Of The Moon'. Hands down.

Are you living your dream?
I am, but I've seen the future so there is more to this dream. Life is changing rapidly and we cant get stuck on one idea or way of being for too long or it or will haunt your subconscious and leave you stagnant and spiritually constipated. I have huge plans and I know I will get there. More work, more dues, more airplanes, meditating, breathing and repeat until my vision has been met then make new visions and manifestations.
Thanx TofA and Matthew!
Tone Of Arc are currently touring, make sure you go to a show if you can...
Posted by Brent at 4:40 PM