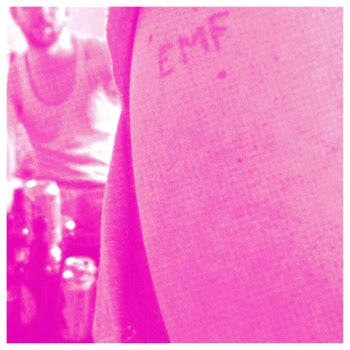 On this split "debut LP" between Jared Fairfield & Afraid the duo give us a sneak peak into a (not so) distant future filled with all sorts of luscious-dark sounds. Both of these artists are a shining example of underrated/overlooked talent. This release was/is severely overlooked, and not nearly enough people are talking about it.. a shame really. I have a feeling this is all about to change though (especially as more and more people talk about how great this release truly is;).
Jared & Jakob (Afraid) compliment each other perfectly on 'EMF'. Jared's sounds are somewhat "Balam Acab-y meets Post Drag/Trance meets Ʌ", whereas Afraid's sound are more Dark/Gothic Electronica (can't think of a comparison at the moment, although..maybe "Radiohead Drag" comes to mind, also Ʌ). The general tone of this release as a whole is "mournful Post Dub/Trance Drag Step". There's enough variance here to suite a lot of moods, overall though it's atmosphere is best suited for slower more cumbersome-melancholy days infused with a small lining of post-hope. What "EMF" means we may never know (I guess it's a secret), it doesn't really matter though. You will be so intrigued by this release that it just doesn't matter what it necessarily "represents/narrates" (side note: this is only the first album of many in the "EMF" series..II is on it's way soonish I believe). Come up with an acronym of your own, I think you'll feel/agree with what these two artists were going for when they put this piece of art together, you'll also agree with me when I say "I need moar NOW (please?)".
Highly (good enough for this list = good enough for you.) Recommended.
Standout Tracks: Fair Skin, The Mountain, It Doesn't Bother Me, Tearing The Tongue, Sissy, All F#$%ed Up (Forever)(on repeat)
Posted by Brent at 4:57 PM