REVIEW: A Winged Victory For The Sullen - S/T 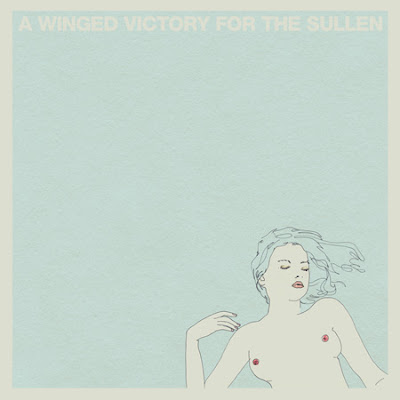 8.5 out of 10
Find it here.
A few things my "winter ears" require; 1. Tonal Warmth 2. Post Bliss 3. Lack of gravity. These are also, coincidentally, three things A Winged Victory For The Sullen's debut has to offer. Let it snow, I'm ready now.

AWVFTS is Adam Wiltzie (Stars Of The Lid/Dead Texan) and Dustin O'Halloran (Dustin O'Halloran). The two of these guys joining forces isn't really that peculiar of a concept, in-fact it makes a lot of sense. Adam and Dustin both seem to have an ear for clear and ideal Classical Ambiance so it only seemed inevitable that their paths would eventually cross. AWVFTS's debut/self titled release is a nice companion piece for both artists involved. Slow murmurations of gorgeous synths swimming in a pool of strings and an accompanied piano that is no doubt one of the most gorgeous things I've ever heard. Track 1 is a bit of downer, a gorgeous effervescent disaster slowly unfolding into itself to reform the polar opposite. Track 2 is just as slow moving, maybe more so since the shift of the piano has been more focused towards the swirling synthetic strings, I really like this track (a lot) a lot. Track 3, ohhh track 3..soooo warm. Every track just gets better and better the further you listen. Music like this only comes along so often, its even better when it comes out during the proper season. What you would expect from these two artists has indeed unfolded in a grand manor that will hopefully be replicated on a new album sometime in the near future. If this (see track 5. 'Steep Hills..') is only the beginning of this bands career ..I don't know how much more emotion my ears can handle, but I'm willing to risk it. More please?

Said it before, say it again (always and forever) it's Kranky so you know the "gold standard" is there. Recommended for fans of slow motion.

Standout Tracks: All. (but mainly) Requiem For Static King Part 2, Minuet For A Cheap Piano, Steep Hills Of Vicodin Tears (yum), A Symphony Pathetique (imagine (happily) dying in the snow to this song)
Posted by Brent at 5:48 AM